Andi Lynn’s Herbalist and CEO, Andrea Leyerle, was recently featured in the Greater Baton Rouge Business Report as April’s Entrepreneur spotlight. Here’s what they had to say:

JUST A SPOONFUL
Nine years ago, Andrea Leyerle was a stay-at-home mother of three young children who was interested in living a more self-sufficient lifestyle. So she taught herself how to grow and preserve her own foods, and began cooking from scratch. When her entire family came down with the flu in the winter of 2010, she turned to “Doctor Google” for natural remedies, which led her to discover elderberry syrup. Made from the dark purple berry produced by the European elder tree, the syrup is widely used to help with everything from the common cold to cancer. “I was sick as a dog and then I was 100 percent better. I was so impressed, I was convinced I never wanted to be without it in the house. It was going to live in the cupboard next to the Band-Aids.” By the following spring, Leyerle was cooking up elderberry syrup in her kitchen and selling it at the Livingston Parish Farmer’s Market, where she quickly attracted loyal customers.

FROM MARKET TO SHELVES
Leyerle admits she never really aspired to launch her own business; she just wanted to help people feel better. But eventually the demand at the farmer’s market became so great that she couldn’t pass on the opportunity to scale up. “It got to the point where distributors from Baton Rouge would bring ice chests.” In 2013, the first local health food store began stocking Andi Lynn’s Elderberries products. As word spread, more stores began carrying her product and she also began wholesaling. By 2016, wholesaling accounted for 95% of sales, and the following year she rebranded the company as Andi Lynn’s Pure & Custom Formulary, selling over 20 herbal remedies online and in over 150 retail shops across eight Southern states. 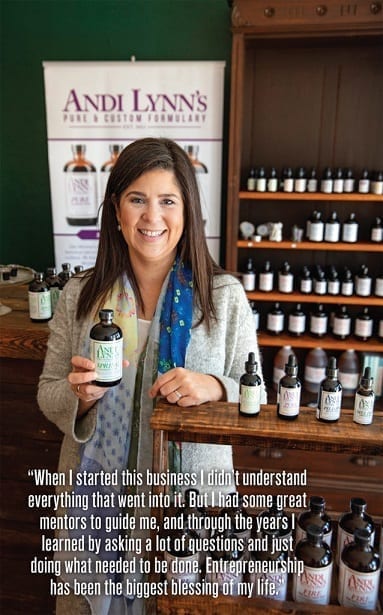 A particular brutal flu season last year put elderberry in the national spotlight and further propelled the growth of Leyerle’s business. “We grew really fast last year after everyone figured out what elderberry was.” Aided by the    Nexus LA program at the Louisiana Technology Park, which helped Leyerle solidify her company’s goals and      growth plan, revenue reached $518,000 last year. Intent on breaking the $1 million mark this year, Leyerle is hiring territory managers to bring her products to new markets and corporate buyers. In January, she held a grand opening for a brick-and-mortar location in Walker. Starting this spring, the company will outsource the manufacturing of products as it works to further scale up operations. “Our goal is to go from a regional to a national brand.”